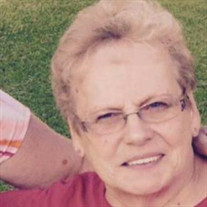 Rosalie Marion Robert, 66 years old of Malone, New York, died on December 9th at the Fletcher Allen Hospital in Burlington, Vermont. Born June 4, 1950, she was the daughter of Margaret McDonald (Tucker) and Richard Tucker. On November 12, 1994, she married her love Phillip Peter Robert. Rose as she was called, retired from the Malone Central School District after 35 years of service in the custodial dept. Rose loved to paint, draw and make crafts, crossword puzzles, her blueberry muffins in the morning with best friend Pat. She is survived by her mother Margaret Hammond McDonald; children and stepchildren, Tina (Chris) Marlow, Wallace (Lori) Robert, Troy Peryea, Jennifer (Thomas) Payne and Kendra Humiston as well as 12 grandchildren, Christie, Kinsley, Adam, Stephanie, Dylan, Isaiah, Reid, Ian, Celeste, Brayden, Jennifer and Jaden; three great-grandchildren, Jenna, Avery and Kali-Anna. She is also survived by her siblings, Wayne (Carolyn) Tucker, Joyce (Robert) Collins, Clayton Tucker, Judy (Danny) Ashlaw, Dianne Cameron, Danny Tucker, Vicki (Floyd King) Jeffers along with many nieces, nephews and cousins. Rose was predeceased by her husband, Phillip Peter Robert on July 4, 2015, and her father, Richard Tucker. Calling hours will be held at St. Mary-Murphy-Wilcox Funeral Home in Malone, NY on Thursday, Dec. 15 from noon to 3 p.m. To prevent and cure diabetes and to improve the lives of all people affected by diabetes, the family asks instead of flower arrangements to make a donation to the American Diabetes Association. Some say love, it is a river, that drowns the tender reed Some say love, it is a razor that leaves your soul to bleed Some say love it is a hunger and endless aching need I say love it is a flower and you its only seed It’s the heart afraid of breaking, that never learns to dance It’s the dream afraid of waking that never takes the chance It’s the one that won’t be taking that cannot seem to give It’s the one afraid of dying that never learns to live When the night has been too lonely and the road has been too long And you think that love is only for the lucky and the strong Just remember in the winter far beneath the bitter snow Lies a seed that with the sun’s love in the spring becomes the rose

The family of Mrs. Rosalie Marion Robert created this Life Tributes page to make it easy to share your memories.

Send flowers to the Robert family.