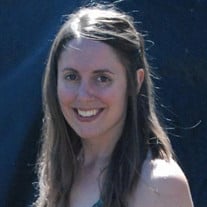 Sarah S. Chapin Knight passed away on Saturday March 2 , 2019 after a tragic hiking accident on Stansbury Island Utah, surrounded by all that she loved: Her devoted husband Tanner, her loving friend Naresh Francois, her two dogs and nature. Sarah was born on August 20, 1981 in Manhattan, New York, the daughter of Beverly Higbee Symonds and Joel Chapin formally of North Bangor. Sarah grew up in Glen, NY as well as Saratoga Springs and graduated from Fonda-Fultonville High School in 1999. Sarah received an A.S. degree from Fulton-Montgomery Community College in 2002, and then a Bachelor’s and Master’s degree in special education from the State University of New York at Plattsburgh in 2006. Sarah worked as a special education teacher, first in Ticonderoga, NY and later in Bountiful, Utah. As an educator, Sarah worked countless hours making a positive impact on her students lives. Sarah’s enduring patience, kindness and wisdom suited her well for her role as an effective teacher. In 2015, she changed careers to work as a dealer representative for the Salt Lake City based clothing company Kuhl. At Kuhl, Sarah’s cheerful, diplomatic personality enabled her to become an integral part of an effective team. Sarah was highly skilled and productive at her job, while maintaining her ever-present genuine respect and sincerity for everyone she worked with. Sarah married Tanner Knight, a native of Keeseville NY, on December 12, 2012 in Salt Lake City. In May of 2013 an unforgettable celebration of their marriage was held in Moab, Utah for their many family and friends . This event was a filled with joy and laughter that would become a cherished memory for all who were present. Sarah and Tanner’s life together was a filled with the company of many close friends who all shared a love of the outdoors, adventure, music, art and food. Countless camping trips, mountain biking, and hiking with their two beloved dogs Jack and Max brought joy to their time together. Sarah was described by Tanner as having a transformative power over everyone she encountered saying, “She was the best person I ever knew”. Sarah’s ability to positively transform was not limited to people. Sarah had a creative mind and a pioneering spirit that could transform a dry sun- baked yard into a garden oasis of vegetables, fruit and flowers. Her love of the natural world was a passion and provided endless joy. By age four she could specifically name every wildflower , bird and berry she encountered , this ability expanded throughout her lifetime. She also had a special fondness for animals both wild and domestic, raising chickens, sheep, goats, rabbits, dogs, bees and ferrets to name a few. Sarah’s hospitality was legendary. She will be remembered for making unforgettable meals for friends and family at any hour of the day or night, whether inside their home or on a camp fire in the wilderness. Her ever present kindness, compassion, grace and humor were an inspiration to all. These qualities are unanimously echoed by those who knew her, from her childhood days to the present. Sarah’s devotion to her family was paramount, despite the miles between us. Sarah made her parents, siblings, grandparents, aunts , uncles and many cousins always feel so loved. Her family’s trips to visit Sarah and Tanner were always epic adventures and the highlight of every year. Sarah is survived by her husband Tanner Knight of Salt Lake City, her mother, Beverly Symonds of Queensbury NY, her father Joel Chapin and step-mother Linda Wason of Amsterdam, NY, her brothers Benjamin Chapin, Ian Chapin and his partner Courtney Leo, Lucas Chapin and his wife Hikari Morikawa and brother Noah Benveniste as well as grandparents Marieanne and William Wason of Centerport NY. She is also survived by her mother-in-law Alice Knight of Keeseville NY, brother-in-in law Travis Knight and many loving aunts, uncles, cousins and friends. She was predeceased by her maternal grandparents Patricia and Francis Symonds of Tenafly NJ, her paternal grandparents Ruth and Russel Chapin of North Bangor, and her father-in-law Doug Knight of Keeseville NY . A Mass of Christian Burial will take place at St. Augustine’s Catholic Church in North Bangor, NY on Saturday, May 4 at 11 a.m. with burial to follow in the parish’s cemetery. A life celebration will be held after the funeral ,time and location to be announced. Donations may be made in Sarah’s memory to any S.P.C.A. or other charity of your choice.

Sarah S. Chapin Knight passed away on Saturday March 2 , 2019 after a tragic hiking accident on Stansbury Island Utah, surrounded by all that she loved: Her devoted husband Tanner, her loving friend Naresh Francois, her two dogs and nature.... View Obituary & Service Information

The family of Mrs. Sarah S. Chapin Knight created this Life Tributes page to make it easy to share your memories.

Send flowers to the Knight family.