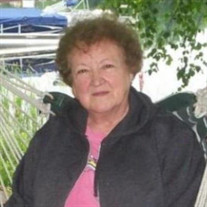 Shirley L. Jones, 82, of Malone passed away Thursday, August 12th, 2021 at the home of her son Casey, surrounded by her loving family and under the care of Hospice of the North Country Shirley LaPoint Jones was born August 27, 1938. She started her business career at Imperial Paper Mill in Plattsburgh, and from there went overseas to work in Special Services for the Armed Forces in Heidelberg, Germany. The last 30 years she has worked as a manager of Malone Business Center Inc., property manager for Helm Inc., and John Mills rental properties. She loved to work in the public and liked to be among people every day. Married and divorced, she brought up three children as a single parent, and had four granddaughters who were the light of her life, and a family she loved to spend summers with at the “Lot” on Chateaugay Lake. Her family included a sister, three brothers, many nieces, nephews and cousins, her children, her grandchildren and extended families. Her heart was always there on that Lake, and her family was her life and inspiration for living. She is survived by her three children, Lisa Walton and her husband, Dale of Malone, Casey N. Jones of Constable, and Jill Jones of Chateaugay; her four granddaughters which she adored and called her “girls”, Miranda Wilson and her partner, Ashley Warner, Mackenzie Wilson, Gabrielle Beebe and Poppy Dupuis. She is also survived by a granddaughter by marriage, Kristen (Walton) Lapierre and her three daughters, Lola, Madison and Marley Lapierre whom Shirley loved dearly and considered her own great-grandchildren; a brother, Larry Ashline and his wife, Tina of Constable; a sister, Cindy Dowd and her husband, William of Merrill; two sisters-in-law, Marcia Ashline of Colchester, Vermont and Nancy Ashline of Chateaugay; as well as many cousins, nieces, nephews, great nieces and nephews. She was predeceased by her parents, Bernard and Margaret (LaPoint) Moore and two brothers, Hulcy and Karl Ashline. A Celebration of Life will be celebrated at the Brainardsville Community Center, 30 State Route 190, Brainardsville on Saturday, August 21, 2021 at 3:30 p.m. In lieu of flowers or gifts, the family asks that donations in Shirley’s name be made to Hospice of the North Country 3909 State Route 11, Malone which was an organization that was very dear to her heart.

Shirley L. Jones, 82, of Malone passed away Thursday, August 12th, 2021 at the home of her son Casey, surrounded by her loving family and under the care of Hospice of the North Country Shirley LaPoint Jones was born August 27, 1938. She started... View Obituary & Service Information

The family of Mrs. Shirley L. Jones created this Life Tributes page to make it easy to share your memories.

Send flowers to the Jones family.