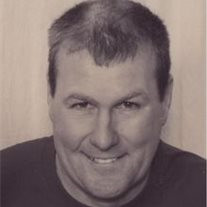 Stephen A. Harrigan, 52, of State Route 190, Chateaugay, NY passed away unexpectedly on Saturday, February 20, 2016. He was born in Malone, NY on September 20, 1963, the son of Thomas and Dorothy (Mansey) Harrigan. Steve will be remembered for his infectious smile, laughter, teasing manner, his way of giving everyone a nickname and his one eyebrow raised look after he named you. He was a hardworking farmer/co-owner of Harrigan Brothers Dairy with Gary and Todd. Together, they made many memories and friends while completing consignment work and taking care of the home farm. He was most comfortable on the home farm in the "office" and shop. One and all were welcome anytime. Left to cherish his memory are his two children, Nathan Thomas, age 11 and Casie Marie, age 10; his father, Tom; eight brothers, Jim and his wife, Lynn, Bill and his wife, Angie, Frank, Dale, Gary and his wife, Jill, Scott and his wife, Shann, Todd and his wife, Diane, Tommy Joe and his wife, Kristy; two sisters Joanne Bushey and her companion, John Miller, Kathy Firlet and her husband, Joe; an uncle, Charles Woodliff; a herd of nieces and nephews; a flock of cousins; and a gaggle of great-nieces and nephews. Steve was predeceased by his mother, Dorothy; brother, Paul and sister, Cindy. There will be no calling hours. A Mass of Christian Burial will be held at 11 a.m. on Saturday, February 27 at St. Patrick's Church, Chateaugay with Rev. Thomas Kornmeyer officiating. The family would like to invite everyone to the Chateaugay American Legion following the Mass to continue the celebration of Steve's life. In lieu of flowers, donations in his memory may be made to an education fund which will be created for his children, Nate and Casie or the Chateaugay Fire Dept.

Stephen A. Harrigan, 52, of State Route 190, Chateaugay, NY passed away unexpectedly on Saturday, February 20, 2016. He was born in Malone, NY on September 20, 1963, the son of Thomas and Dorothy (Mansey) Harrigan. Steve will be remembered for... View Obituary & Service Information

The family of Mr. Stephen A. Harrigan created this Life Tributes page to make it easy to share your memories.

Send flowers to the Harrigan family.