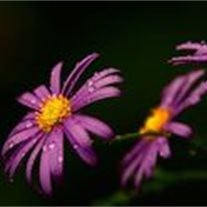 Theresa A. Lobdell, 91, formerly of Chateaugay died Monday, March 2, 2015 at Alice Hyde Nursing Home, Malone, N.Y. Born in Mooers Forks, N.Y. on Jan. 24, 1924, she was the daughter of Henry and Flora (Guerin) Barcomb. She was married to Leonard Lobdell on November 25, 1949 in Malone. He predeceased her on May 17, 1998. In her early years, Mrs. Lobdell attended school in Churubusco. She was employed at Tru-Stitch, first in Chateaugay then Malone as a pressor for 12 years. She later worked in the kitchen at the Chateaugay Hotel and the cafeteria of Chateaugay Central School. For many years, she also worked at the Franklin County Fair serving food at the grandstand. She was a communicant of St. Patrick's Church and a member of the Altar and Rosary Society and Catholic Daughters. Mrs. Lobdell loved bingo, flower gardening, cross stitching and knitting. She enjoyed spending time with her grandchildren and great-grandchildren. Despite a sometimes difficult life, she was always happy and never had a cross word for anyone. Mrs. Lobdell is survived by a daughter and son-in-law, Lucille and Jeff Gillette of Chateaugay; three sons and daughters-in-law, Robert and Cathy Lobdell of Chazy, James and Mary Lobdell of Chateaugay, and John and Karen Lobdell of Rome; eleven grandchildren; fourteen great-grandchildren; two great-great-grandchildren; two sisters, Lucille Collins of Plattsburgh, and Cecile Harte of Vermont; and several nieces and nephews. Besides her husband, she was predeceased by her parents; a son, Kenneth Lobdell; nine brothers, Howard, Homer, Leeward, Hubert, Ernest, Harold, Leon, Earl and Henry Barcomb; and three sisters, Genevieve Santor, Rose Decker and Yvonne Barcomb. Calling hours will be held at the Chateaugay Funeral Home on Thursday, March 5 from 12:30 to 1:30 p.m. A Mass of Christian burial will follow at 2 p.m. in St. Patrick's Church, Chateaugay with Rev. John Looby officiating. Spring burial will take place at Burke Center Cemetery. Donations in her memory may be made to the American Cancer Society or the Alzheimer's Association.

Theresa A. Lobdell, 91, formerly of Chateaugay died Monday, March 2, 2015 at Alice Hyde Nursing Home, Malone, N.Y. Born in Mooers Forks, N.Y. on Jan. 24, 1924, she was the daughter of Henry and Flora (Guerin) Barcomb. She was married to Leonard... View Obituary & Service Information

The family of Mrs. Theresa A. Lobdell created this Life Tributes page to make it easy to share your memories.

Send flowers to the Lobdell family.