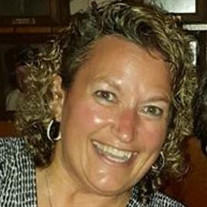 Theresa M. Siskavich, 49 of Wilmington, NC passed away Wednesday, December 13, 2017 in Lyon Mountain, NY at her childhood home after a valiant three year battle with peritoneal mesothelioma. Born May 22, 1968 in Plattsburgh, NY she was the daughter of Priscilla (Golovach) and Edward Siskavich. She lived in the North Country until she relocated to North Carolina 28 years ago. Theresa lived life to the fullest and always had a positive demeanor and a smile. She was fiercely independent, humorous and sported some colorful language that would make a sailor proud. She loved attending concerts of all venues, watching Sunday afternoon football with friends, boating, traveling and collecting pub glasses from everywhere. There was never a dull moment when hanging out with Theresa. She had her favorite spots she would visit every time she returned home for a visit…Meron’s to visit Grace, Anthony’s to catch up with Jimmy, and Monopole for pizza and wings, Mickey’s for calzone, Chateaugay CoOp to stock up on cheese curds, Brainardsville Harrigan’s for huge ice cream cones and let’s not forget Ronnie’s Michigans if opened. She tried to pack in as much visiting with her friends while up here. Theresa was a graduate of Northern Adirondack Central School where she played soccer, volleyball and softball. She graduated from Clinton Community College and then SUNY Plattsburgh with her nursing degree. Theresa practiced emergency nursing throughout her career starting at Champlain Valley Physicians Hospital in Plattsburgh, NY. She then ventured south and started travel nursing throughout North Carolina, Tennessee, Virginia, and Maryland. When she was unable to continue emergency nursing, she started nursing administration work and was working at New Hanover Regional Medical Center. She was an avid football fan and her favorite team was the Jacksonville Jaguars. She would drive 8 hours to Florida to watch them play. She loved the beach and of course she loved completing beer tours for glasses, t-shirts, name plate or bragging rights. She knew how to have a good time. She is survived by her parents, her sister Victoria and her nephew, Ty Jones. She will surely be missed by her rescue dogs/fur babies Reily and Stella. She leaves behind a large extended family on the Siskavich and Golovach sides. She also leaves behind her North Carolina family/friends, Chick, Michelle, Chris, Karen and Laurie. She was predeceased by her godmother/aunt, Barbara Golovach Martin, her maternal and paternal grandparents, Loretta and Anthony Golovach and Bernard and Eva Siskavich, as well as her fur babies Abbigale and Toonces. There are no calling hours. A memorial service will be held at St. Bernard’s Church in Lyon Mountain at 10AM on Thursday, December 21, 2017. In lieu of flowers, donations may be made to the Lyon Mountain American Legion Sorrell Woodward Post 1623, P.O. Box 19, Lyon Mountain, NY 12952 or Paws Place Dog Rescue, P.O. Box 67, Winnabow, NC 28479 or charity of your choice in her memory. Life is going to happen. But we get to choose how we respond. And, in many cases, we get to choose to impact life through the daily actions, words, deeds and choices we make. Theresa was the realization that there is much more to life than simply surviving it. She lived her life to the fullest!

Theresa M. Siskavich, 49 of Wilmington, NC passed away Wednesday, December 13, 2017 in Lyon Mountain, NY at her childhood home after a valiant three year battle with peritoneal mesothelioma. Born May 22, 1968 in Plattsburgh, NY she was the daughter... View Obituary & Service Information

The family of Ms. Theresa M. Siskavich created this Life Tributes page to make it easy to share your memories.