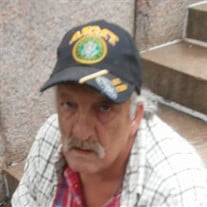 Thomas R. Cook, “Tommy”, passed away unexpectedly at the age of 66 at his home the morning of Aug. 23, 2017. Thomas was born July 15, 1951 in Malone, NY. He was a life long resident. He did grow up and lived in the Depo, and enjoyed being in with the Depo Rat Group. He went to school in Malone and received his GED. He went on to two branches of the services, Army and Marines. He was honorably discharged. He enjoyed fighting for his country. Mr. Cook is survived by his wife, Mellissa Cook. They were married for 30 years. His wife, his children, grandchildren and great-grandchildren meant everything to him. He loved his family more than anybody knew. Mr. Cook was the proud father to seven daughters, Thomasena and Daniel Boyea of Malone, Jayleen and Eddie Shatlaw of Malone, Kim and Jerry Geertgen of Lawville, NY, Tammy Cook and her companion Jason Perry of North Bangor, Nellie Cook of Malone, Allyssa Cook and her companion, Michael Fessey of Malone. He was the proud father to one son, Thomas Cook Jr; one stepson, Willard (Tiny) Fisher and his companion Sally Rivers of Westville NY. Mr. Cook was a proud loving grandfather to his grandchildren, Natasha and Ryan Boyea, Jennifer and Tiffany Raines, Austin Charles, Devin and Wakeshia Perry, Damien and Dametri Reynolds, Aubrey and Jayce Snyder, Elizabeth Kays-Fellers, Justin Lamica, Jennie and Jordan Geertgen, Tim, Thomas and Tracy Fisher, also many great-grandchildren along with many, many nieces and nephews, many loving friends. He is also survived by one sister, Verna and John Cook of Watertown, NY. Mr. Cook was predeceased by two loving brothers, Vernon (Buck) Cook Jr. and Kevin Cook. He was also predeceased by his loving parents, Vernon and Gloria Cook and two grandsons, Christopher Lamica and Darrin Cook-Reynolds along with a step-daughter, Nina Fisher-Dufore. Mr. Cook enjoyed fishing and hunting, collected different animal skulls, watching wrestling, football, baseball. He was a big Yankee fan and rooted for the Yankees. Mr. Cook was a big family person. He loved his children and grandchildren and great-grandchildren. The thing he loved most in his life was being a good loving father that he was. He loved his wife, children, grandkids and great-grandchildren more than anyone will ever know. He had a lot of love in his heart to share with others. Mr. Cook was on a bowling team for Gladys Bar many years ago. Calling hours will be held at St. Mary-Murphy-Wilcox Funeral Home on Tuesday, Aug. 29 from 2 to 4 p.m. A service will follow in the funeral home chapel at 4 p.m. with Roger Preve officiating. Donations in memory of Thomas Cook Sr. can be made to Edward Shatlaw Jr. Donations will go towards the services.

The family of Mr. Thomas R. Cook created this Life Tributes page to make it easy to share your memories.

Thomas R. Cook, “Tommy”, passed away unexpectedly at the age...