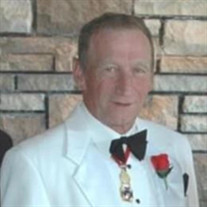 Thomas E. Dwyer, 79, of Chateaugay, died Sunday, April 26 2020, at the Alice Center, Malone. Born on April 4, 1941 in Chateaugay, NY, he was the son of William E. and Claire (Cassidy) Dwyer. He married Margaret F. Feeny on September 19, 1964 in Herdman Corners, Quebec. Thomas graduated from Chateaugay Central School in 1959. He owned and operated the Dwyer Family Farm for over 54 years. He worked for Chateaugay Central School as a bus driver for 34 years. For several years, he coached youth baseball. He was a communicant of St. Patrick’s Church, Chateaugay. Thomas was a life member of Bishop Wadhams Council #469 Knights of Columbus in Chateaugay where he served as Grand Knight, District Deputy, Conference Chairman, and Isle LaMotte Pilgrimage Coordinator. He served in many state chairmanships and served the high offices of State Secretary and State Deputy from July 2001 to June 30, 2005. He was also a member of the 4th Degree Assembly Our Lady of Victory in Malone and Color Corp member. Thomas loved his family and enjoyed watching his grandchildren at different sporting events and activities. He was an avid Yankees fan. Thomas is survived by his beloved wife of 55 years, Margaret (Peggy); 4 sons and daughters-in-law, Arthur and special family friend Cathy Charland, Robert and his wife Kate, Timothy, and Deacon Brian and his wife, Monique, all of Chateaugay; nine grandchildren, Kevin Walker, Eric Dwyer, Emily Dwyer, Stephen Dwyer, Angela Dwyer, Paul Dwyer, Matthew Dwyer, Margaret (Molly) Dwyer, and Lauren Dwyer; 2 brothers and sisters-in-law, James and Rita Dwyer of Vienna, VA, Patrick and Andrea Dwyer of Beekmantown; a sister, Margaret Becker of New York City; a sister-in-law, Mary Lou Dwyer of Chateaugay; many nieces and nephews. He was predeceased by his parents; three brothers, John, William, and Raymond Dwyer; a sister in infancy, Anne Elizabeth, and a brother-in-law, Hy Becker. Due to the current health restrictions in place with COVID-19, Thomas’ funeral mass will be private for the immediate family but will be live streamed on Friday May 1, 2020 at 11am. Please visit https://www.facebook.com/Deac2009/?epa=SEARCH_BOX. A memorial mass and reception will be celebrated at a later date. Burial will take place in St. Patrick’s Cemetery, Chateaugay on Friday, May 1 at 12:30pm. Donations in his memory may be given to St. Patrick’s Church.

The family of Mr. Thomas E. Dwyer created this Life Tributes page to make it easy to share your memories.

Send flowers to the Dwyer family.