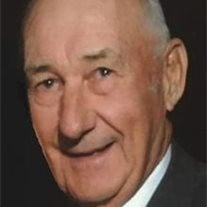 Thomas R. Harrigan, 90, of the Number 5 Road, Chateaugay died Thursday, July 14, 2016 at Meadowbrook Health Care, Plattsburgh, NY where he had been a resident since December 4, 2015. Born in Ellenburg, NY on June 29, 1926, he was the son of William and Maude (McMillan) Harrigan. He was married to Dorothy Mansey on November 22, 1952 in St. Patrick's Church, Chateaugay. She predeceased him on Oct. 8, 1998. Tom graduated from Ellenburg High School. He owned and operated the family dairy farm, Tom-Son-Acres until he retired and still worked helping on the farm driving tractor until his mid-eighties. He was a communicant of both St. Jude's and St. Patrick's Church where he also served on the parish council for several years. Tom is survived by eight sons, Jim and his wife, Lynn, Bill and his wife, Angie, Frank, Dale, Gary and his wife, Jill, Scott and his wife, Shann, Todd and his wife, Diane, Tommy Joe and his wife, Kristy; two daughters, Joanne Bushey and her companion, John Miller, Kathy Firlet and her husband, Joe; 28 grandchildren and 11 great-grandchildren; brother-in-law and his wife, Charles and Helen Woodliff; many nieces and nephews. Besides his wife, he was predeceased by his parents; two sons, Stephen and Paul Harrigan: a daughter Cynthia Lucille Harrigan; three brothers, Francis, John and Gerald Harrigan; three sisters, Marcella Murray, and Lucille and Beatrice Harrigan; his in-laws, Joe and Josephine Woodliff. There are no calling hours. A Mass of Christian Burial will be celebrated at 11 a.m. on Saturday, July 23 in St. Patrick's Church with Rev. John Looby will be officiating. Burial will take place at St. Patrick's Cemetery, Chateaugay. A luncheon will follow at the Knights of Columbus, Chateaugay. In lieu of flowers, donations in his memory may be made to Alzheimer's Association, Chateaugay Fire Department or the FFA – Ellenburg or Chateaugay Chapter.

The family of Mr. Thomas R. Harrigan created this Life Tributes page to make it easy to share your memories.

Send flowers to the Harrigan family.