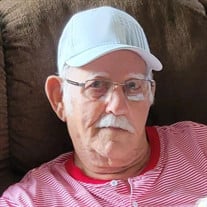 Vance Irving Boyea, 82, of Malone, passed away Wednesday, November 17, 2021 at his home with his family by his side and aided by Hospice of the North Country. Born on May 4, 1939 in Malone, NY, he was the son of Halsey and Velena (Ledger) Boyea. He was married to Sharon Dumas on April 24, 1965 in Notre Dame Church, Malone. Vance enlisted in the United States Army in 1960. During his service, he served in France and was honorably discharged in 1966. He also served in the National Guard for several years and was a past member of the Malone American Legion. He worked as an auto mechanic for 36 years until his retirement. He was a communicant of Notre Dame Church, Malone. Vance’s favorite pastime was playing cards and golf. His most cherished memories were spending time with his family, children and grandchildren. Vance is survived by his wife of 56 years, Sharon; three daughters and a son-in-law, Sherry Boyea (Brandon Black), Vanda and Steven Garneau and Stephanie Baisley all of Malone; seven grandchildren, Jordan Bombard of North Bangor, Jessica Bombard (Eric Lamica) of North Bangor, Allison Pelkey and her husband, Nick of Owls Head, Thomas Garneau (Caitlin Carroll) of Constable, Cody Boyea and his wife, Amanda of Plattsburgh, Colby Boyea of Plattsburgh, Brandon V. Boyea of Malone; ten great grandchildren, Sadie, Mallory, Peyton, Lauren, Bowen, Mollie Mae, Reese, Kaitlin, Conor and Andy V.; a brother, James Boyea and his wife, Sally; two sisters, Carolina Butterfield and Francis Spaid; three sisters-in-law, Jacqueline, Shirley and Ellie Boyea; as well as several very special nieces and nephews. He was predeceased by his parents; a son, Kyle Boyea; two grandchildren, Michael and Zachary Garneau; his father-in-law and mother-in-law, Melfred and Dorothy Dumas; siblings, Eilleen Carr, Marge Miller, Marie Comstock, Augustus Boyea, Eleanor Clark, Rolland, Robert, Gerald and Frank Boyea. There are no calling hours. A Mass of Christian Burial will be celebrated at 12:05 pm on Tuesday, Nov. 23 at Notre Dame Church. Donations in Vance’s memory may be made to Hospice of the North Country or Hastings Hemodialysis Center.

Vance Irving Boyea, 82, of Malone, passed away Wednesday, November 17, 2021 at his home with his family by his side and aided by Hospice of the North Country. Born on May 4, 1939 in Malone, NY, he was the son of Halsey and Velena (Ledger) Boyea.... View Obituary & Service Information

The family of Mr. Vance Irving Boyea created this Life Tributes page to make it easy to share your memories.

Send flowers to the Boyea family.