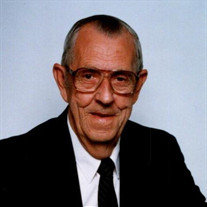 In the early evening of Thursday, September 5, 2019, William “Bill” L. Blow was called home to his maker. Bill was well known in his community of Chateaugay as one who reached out in service to others. Bill was the son of Merritt and Mary Ann (Cook) Blow, born in Ellenburg on July 24, 1931. He attended Ellenburg Central School. On July 17, 1953, he was united into marriage with Florence (Sis) Silver at St. George’s Rectory in Burke, a marriage that lasted 66 years. He was a communicant of St. Patrick’s Church, Chateaugay. Bill worked at many trades to provide for his family. In his early years he worked construction, he was employed at McCadam Cheese and Pearl’s Dept. Store. He became manager of the Pearl’s Dept. Store in Champlain in 1959. Many a night Bill would be seen bar tending at Chateaugay Hotel. Later Bill and Sis became managers of Barcomb’s Furniture which they later owned and went on to be proprietors of Blow’s Grocery on Lake Street, 1975-1984. In his later years Bill was a bus driver/laborer for Chateaugay Central School, retiring in 1996. Bill continued as a “jack of all trades”, he went back to working small scale construction with Lyle’s Carpentry, assisted at the Chateaugay Funeral Home, and was a lawn care provider for St. Patrick’s Cemetery. Bill was a member of the Chateaugay Fire Department for 58 years, holding various offices, a 3rd degree member of Chateaugay Knights of Columbus, a past member and trustee of St. Patrick’s Pastoral Council, a former usher and Eucharistic Minister, a past member of the Malone Golf Club and avid sports enthusiast. Bill loved golfing and bowling and watching sports on TV. On a personal level, Bill was always the family member that family turned to for help or assistance. Bill’s family – children and grandchildren were his pride and joy. He always said that the “greatest gift” at holiday time was having his family gathered around the holiday table. Bill is survived by his loving wife, Sis; three sons, Lawrence and his companion Rose Arno of Ellenburg Depot, Gerald and Janice Blow of Chateaugay, and Randy and Jeri-Lyn Blow of Malone; his loving grandchildren, William C. Blow (Ashley Pryce), Candi Johnston (J Staib), Kendra (Nathaniel) Campbell, Krystal Blow (James Alexander), Heather (Taylor) Artus, and Curtis Blow; a niece who was like a daughter, Sharon LaFlesh; ten great-grandchildren; a brother, Carl (Joan) Blow of Palm Coast, Florida; a brother and sister-in-law, Richard and Mary Whalen of Plattsburgh; as well as many nieces and nephews. Besides his parents, he was predeceased by an infant son, Garry Joseph; his siblings, Marvin, James, Roland, Katherine, Helen, Doris and an infant brother, Henry; his father and mother-in-law, Charles and Seamonne Silver; and a grandson, Mathew Johnston. It would not have been possible for Bill to be able to enjoy being at home with his wife and family if it hadn’t been for a very loving and compassionate daughter-in-law, Janice who cared for “Pa” with unselfish love and caregiving, day in and day out along with his wonderful team of caregivers, Cindy, Sally, Bonnie, Kim, Geri, Jill, Lacy, Catherine, Sabrina and Dorothy. Calling hours will be held at the Chateaugay Funeral Home on Sunday, September 8, 2019 from 4 p.m. to 6 p.m. A Mass of Christian Burial will be celebrated at St. Patrick’s Church, Chateaugay, on Monday, September 9 at 11 a.m. Donations in Bill’s memory can be given to the Chateaugay Fire Department, Hospice of the North Country or St. Patrick’s Church.

In the early evening of Thursday, September 5, 2019, William &#8220;Bill&#8221; L. Blow was called home to his maker. Bill was well known in his community of Chateaugay as one who reached out in service to others. Bill was the son of Merritt... View Obituary & Service Information

The family of Mr. William "Bill" L. Blow created this Life Tributes page to make it easy to share your memories.