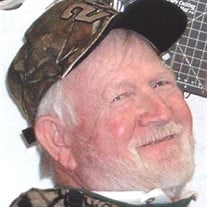 William G. King, 80, of County Rt. 24, Bellmont died Tuesday, Oct. 16, 2018 at The Alice Center, Malone. Born in Bellmont, NY on Sept. 6, 1938, he was the son of Leonard and Gladys (Soulia) King. He was married to Nancy Wood on July 6, 1957 at St. John Bosco Church, Malone. Bill spent his whole life in Bellmont and attended Chateaugay Central School. For a few years, he was employed at Spellman’s and Agway in Chateaugay. He was a dairy farmer for several years. After a year of working for Luck Brothers, the Balsam Hill Tree Farm was established. He operated the farm for 40 years. Bill loved the Christmas tree farm and enjoyed conversing with the customers. Hunting was his passion. He enjoyed spending time in nature and was a Nascar fan. Bill especially enjoyed spending holidays with his family. He will be missed by all. He is survived by his wife of 61 years; five children and their spouses, Laurie and Bernie Perry, Gail and Rick LaPage, Lynn and Tony Portello, Jeff and Glenda King, Scott and Katherine King; 12 grandchildren; six great-grandchildren; a brother and sister-in-law, Richard and Joyce King; a sister, Sandra Cosgrove and her companion, Mike; sisters-in-law, Debbie King, Viola Travers, Sue Reome, Linda Moses and a brother-in-law, Paul Wood. He was predeceased by his parents; two sisters and brothers-in-law, Edna and Fred Fields, Linda and Leonard Johnson; a brother, John King; brothers-in-law, Richard Travers and Richard Wood. Calling hours will be held at the Chateaugay Funeral Home on Saturday, Oct. 20 from 2 to 4 p.m. A prayer service will immediately follow in the funeral home chapel at 4 p.m. with Deacon Brian Dwyer officiating. Following the prayer service, a celebration of Bill’s life will continue at the Brainardsville Family Center (formerly St. Jude’s Church), Brainardsville, all are invited. Donations in his memory may be made to the Burke Volunteer Fire Department.

The family of Mr. William "Bill" G. King created this Life Tributes page to make it easy to share your memories.