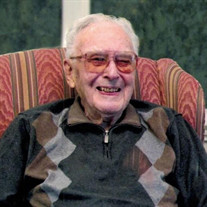 William H. Cullen, Sr. (Bill) passed away on May 21, 2022 at Waltonwood/Lake Boone Assisted Living Community in Raleigh, NC. In recent years, he had resided also at The Kempton at Brightmore Assisted Living Community in Wilmington, NC. Previously, he resided in Potsdam and Chateaugay, NY. He was 103 years old. Arrangements are with the Garner Funeral Service. Thoughts, memories, prayers and condolences for the Cullen family can be shared @www.garnerfh.com. Bill was born in Brasher Falls, NY on February 11, 1919, the son of Dr. William H. Cullen and Helen (Woods) Cullen. Dr. William passed away in 1930, and from then, Bill was raised by his mother, residing mostly in Potsdam. Helen Cullen passed away in 1975 at age 94. Bill had two sisters, Frances (Fran) who passed away in 2005 at age 94, and Jean, who passed away in 2014 at age 106. Longevity was rampant among the Cullen matriarch and siblings. Bill graduated with a teaching certificate from Potsdam Normal School in 1939, returning in 1946 to obtain a B.S. in Elementary Education. He obtained an M.S. in English Education from St. Lawrence University in 1952, and a Ph. D. in English Education from SUNY-Albany in 1975. He taught high school English at Chateaugay Central School from 1947 through 1964, and then taught English Education Methods at SUNY-Potsdam from 1964 through his retirement from full-time teaching in 1984. In 2001, he assisted the founding of the Potsdam lifelong-learning group for retirees, SOAR (Stimulating Opportunities After Retirement) which currently offers around 75 courses per year to residents of the St. Lawrence and nearby county areas. Bill was married in 1943 to Margaret Boyer (Peg) at St. Joseph’s Church in Malone, NY, just after enlisting in the U.S. Army, and being accepted into the Army Air Corps. During WWII, Bill flew cargo planes and troop carriers in the South Pacific theater, mainly the Solomon and Marshall Island area. He was honorably discharged from active service in October, 1945, entered the US Army Air Corps Reserve in 1946, (which became part of the U.S. Air Force) resigning in 1955 as Captain. Peg passed away in 2003, following 59+ years of marriage. Bill married Alice Serfis in 2004; Alice passed away in September, 2013, at which time Bill moved to Wilmington, NC to be near his son. In addition to his responsibilities as an educator, Bill was active in the communities in which he resided. For eleven years he was the Boy Scout Master in Chateaugay, guiding three young men to the rank of Eagle Scout. In 1953, Bill accompanied five scouts from Chateaugay, plus a large troop of others from the Adirondack Council (of New York) to the National Jamboree in Irving, CA. Bill and these scouts enjoyed the cross-country train rides to and from the jamboree location, just south of Los Angeles, CA, including stops in Yellowstone National Park and Salt Lake City, UT. Bill was especially active in the Rotary Club and the Knights of Columbus in Chateaugay. For many years he directed stage shows at Chateaugay Central School to further the fundraising activities of the Rotary Club. Some of the income from the shows propelled the development of the original Recreation Park with its (ice-cold) swimming hole south of Chateaugay. Dad loved mincemeat pies in the Fall, strawberry shortcake in the spring, and ice cream with chocolate sauce any time of the year. Even at age 99, he expressed frequently his hopes of dancing once again at the Moulin Rouge nightclub in Paris’ Montmartre district. Ever the ladies man, he waited until every woman at his table would sit down before he would, and would hold as many chairs for the women as possible. Bill harbored a lifelong reluctance to avail himself of waiting rooms, and the services of nurses, doctors and hospitals. It was a good thing he was as healthy as a horse. At age 98, his eyesight clouded up, degrading from 20/25 to around 20/400; the issue was a precipitous growth of cataracts. He was reluctantly dragged to an outstanding ophthalmologist; and surgery was scheduled. When he woke up after the cataract was removed, and a new lens inserted in his right eye, he remarked, “Well, that wasn’t bad. When can we have the other one done?” Bill is survived by his son and daughter-in-law, Bill, Jr. and Geri, two grandchildren, Dr. Jeff Cullen, the Director of Student Conduct and Community Standards at Univ. of Maryland – Baltimore County, in Catonsville, MD, and Dr. Deborah Thomas, a dentist in Allen, TX. There are four great-grandchildren and numerous nieces and nephews. A Mass of Christian Burial will be held at 10:00 AM on August 5th at St. Mary’s Catholic Church in Potsdam. NY. If desired, a memorial donation could be made to the Bill and Peg Cullen Scholarship Fund at SUNY-Potsdam.

The family of Mr. William H. "Bill" Cullen Sr. created this Life Tributes page to make it easy to share your memories.