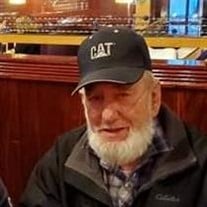 William J. Helm, Sr., 78 of State Route 374, Chateaugay died Friday, Aug. 9, 2019 at the CVPH Medical Center, Plattsburgh. Born on Feb. 14, 1941 in Brainardsville, NY, he was the son of Frank and Mary (Sitifer) Helm. He was married to Cynthia Secore on Dec. 31, 1971 in Burke, NY. She predeceased him on Feb. 24, 2010. Bill graduated from Chateaugay Central School. He enlisted in the National Guard in 1961 and was honorably discharged in 1964. He was employed for many years with Luck Brothers in Plattsburgh. He also owned and operated Helm Construction. Bill enjoyed riding his motorcycle with his wife, Cynthia. He is survived by four children, Carla Kelly and her husband, Jeffrey of Plattsburgh, Vickie Racine and her husband, Allen of Champlain, William John Helm Jr. of Plattsburgh, Weena Dibble of Vermont; eight grandchildren including Ashley A. Helm of Chateaugay and Curtis W. Helm and his wife, Brittnie of North Bangor; 13 great-grandchildren including Christopher William Francis Helm; his daughter-in-law, Diana (Tavernia) Collins; a brother, Jimmy Helm and his wife, Sandra of Brushton and several nieces and nephews. Besides his wife, he was predeceased by his parents; two sons, Christopher Allen Helm and Frank Robert Helm; two brothers, Bob and Kenny Helm. There are no calling hours. Family and friends are invited to Whispering Maples Memorial Gardens, Ellenburg Depot at 10 a.m on Friday, Aug. 16 for his entombment. The family would like to invite everyone to the Chateaugay American Legion following the entombment to continue the celebration of Bill’s life.

The family of Mr. William J. Helm Sr created this Life Tributes page to make it easy to share your memories.

Send flowers to the Helm family.