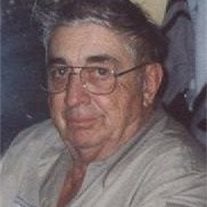 William "Bill" J. Jones, 76, of the Jones Road, Chateaugay died Wednesday, June 26, 2013 at his home. He was born in Chateaugay on May 23, 1937, the son of Arthur and Margery (Mills) Jones. Bill attended Chateaugay School. He drove school bus for Chateaugay School for 19 years. He was a lifetime farmer and owner of Bill Jones Dairy and Potato Farms. Bill was a 19-year member of the Chateaugay Fire Department. He served as a Town of Chateaugay Board Member for 27 consecutive years. He was a past chairman of the Town of Chateaugay Democratic party and Franklin County Democrat Committee member for many years. Bill was an avid hunter for many, many years and member of the Johnston Hunting Club. He was most happy driving around in his truck checking the fields. He was a proud "Papa" and loved attending events of his two grandchildren. He never missed a morning with "the guys" at Stewart's in Chateaugay. Survivors include his wife of 50 years, Mary (Stevenson) Jones; three children, Tom Jones of Chateaugay, Steve Jones and Pat Dustin of Malone, and Michael Jones and his partner Kristine Lashway of Chateaugay; two grandchildren, Tyler and Jenny Jones; his siblings, Judy Earl, Jean Fall, Bob Jones and Emma Tolosky all from Chateaugay, Jerry (Barb) Jones of Malone, Diane (Walt) Podwirny of Queensbury, David Jones of Rochester, Nancy (Frank) Koti of Florida, Frank (Cindy) Jones of Niagara Falls, and Peggy Beckman of Westfield; sister-in-law and brother-in-law, Helen and Ross Anderson of Ormstown, Quebec; many nieces, nephews, cousins and a family friend, Mary Jones of Chateaugay. Bill was predeceased by his parents; his in-laws; siblings, Helen Goodman, Anna Post, Kate O'Neill, Mary Duquette and Jimmy Jones; a brother-in-law and sister-in-law, Bill and Pat Stevenson. Calling hours will be held at the Chateaugay Funeral Home on Monday, July 1 from 3 to 6 pm. A Mass of Christian Burial will be celebrated at 11 am on Tuesday, July 2 at St. Patrick's Church, Chateaugay with Rev. John Looby officiating. Burial will follow in the parish cemetery. Donations in his memory may be made to the American Heart Association. The family wishes to thank the many, many farm workers employed by Bill over the years. Although a man of few words, he deeply appreciated their hard work for his farms.

William "Bill" J. Jones, 76, of the Jones Road, Chateaugay died Wednesday, June 26, 2013 at his home. He was born in Chateaugay on May 23, 1937, the son of Arthur and Margery (Mills) Jones. Bill attended Chateaugay School. He drove school bus... View Obituary & Service Information

The family of Mr. William J. Jones created this Life Tributes page to make it easy to share your memories.

Send flowers to the Jones family.