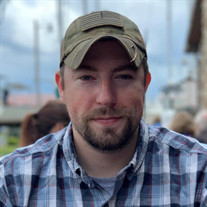 Zachery G. LaClair died August 11, 2021 due to a motorcycle accident on Route 374 in Chateaugay, NY. He was 29 years old. He will be remembered fondly and respectfully by all who knew him. He is survived by his parents, Karla LaClair-Reynolds and Scott Reynolds of Chateaugay and Anthony Gibbs; his daughter, Serenity LaClair of Texas whom he adored; his sister, Carney LaClair and her fiance, Andrew Roberts of Chateaugay; a brother, Steven Perham of Florida; his fiancee, Alyssa Senecal of Bangor; his grandfather, Francis LaClair of Constable; a nephew, Miles Roberts of Chateaugay; his extended brothers, Joe and Jay Lawrence; many aunts, uncles and cousins. He was predeceased by his grandmother, Beverly LaClair. Zachery was the jack of all trades. He graduated from Chateaugay Central School in 2010 where he gained all sorts of knowledge including carpentry. He went to college for criminal justice and graduated in 2012. He went on to serve his country for 4 1/2 years. He was deployed to Iraq as a combat medic. He was honorably discharged. He then worked for the Town of Burke where he learned everything about heavy machinery. He then went on to work for Customs and Border Protection. In everything Zachery did, he gained knowledge and respect and he shared that knowledge and respect too. Zachery's hobbies included fishing, hiking, working on vehicles and tractors, drawing, being with loved ones, buying everything "American Made", guns and the study of American history. He often taught about history without even knowing it. He could be very serious but he could also be hilarious. He could make crowds of people laugh hysterically. Calling hours will be held at the Chateaugay Funeral Home on Wednesday, August 18 from 3 to 6 p.m. A prayer service will immediately follow in the funeral home chapel at 6 p.m. In lieu of flowers, donations in his memory may be made to his daughter, Serenity. If Zach could leave any last words to you, it would be "Be a part of the reason you can be proud to be an American, remember what respect and kindness means, and love your family, God, and your country."

Zachery G. LaClair died August 11, 2021 due to a motorcycle accident on Route 374 in Chateaugay, NY. He was 29 years old. He will be remembered fondly and respectfully by all who knew him. He is survived by his parents, Karla LaClair-Reynolds... View Obituary & Service Information

The family of Mr. Zachery G. LaClair created this Life Tributes page to make it easy to share your memories.

Send flowers to the LaClair family.